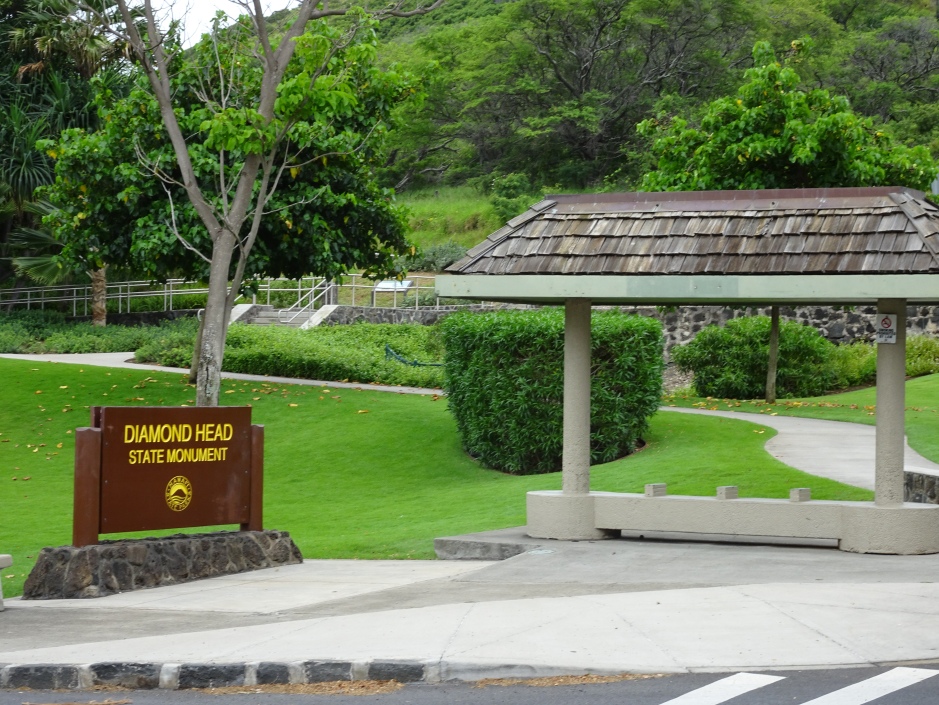 Doug and I had compromised, I did the Pearl Harbor tour and he would do Diamond Head. I really wanted to hike up Diamond head. When we lived in Calgary, AB, we did a lot of hiking. Oh the good ‘ole days.

We grabbed breakfast at McDonalds. We had checked into how to get to Diamond Head and it was super simple. One bus and the stop was close to the hotel. We headed out around 11:00 am and took Bus #23 to the base of the Diamond Head National Park. Here is a photo of our hotel from the street.

We arrived at the entrance to Diamond Head around 11:45 and started walking in.

We came up to a tunnel that we had to walk through. Narrow sidewalks and quite busy with traffic. A little scary.

We survived and came out the other side. Thinking we should have looked into this trolley! We saw a few trolleys. It was actually a further walk from the main road than I had thought it would be, but definitely doable, since we were able to do it.

We finally got to the base and purchased our entrance tickets. I have to chuckle at the tours that list entrance fees included for Diamond Head. All of US $1.00 but no refunds now!

Had a quick pitstop at the washrooms as we had quite the hike coming up. Of course I had to take a picture of the sign. Haven’t seen a good one in a while. Do not wash clothing. I guess that means no hand washing for us here. Guess it is a good thing we didn’t bring any with us.

Saw some of the local wildlife both before and after our hike. The red headed birds are Brazilian Cardinals and the red butted bird is a Red-Vented Bulbul. I have no idea what the 4 legged animal is.

A last check before you head up.

We were off! Don’t let this level ground trick you.

It was a gradual incline at the start.

Saw a couple of guys that must be military practicing, as who else would lug huge backpacks up Diamond Head?

The path slowly started to deteriorate and get steeper and the switchbacks started.

The view was getting nicer.

You can see the entrance to the park in the distance.

We were getting there.

There were even tunnels way up here. I really dislike tunnels.

We made it to one of the first lookout points. Someone felt sorry for me trying to take selfies, so offered to take our photo for us. Thank you kind person.

In the distance to the right you can see a couple of old bunkers. My camera has a pretty good zoom on it for a point and shoot camera. I never bring my DSLR as it is too bulky when traveling with backpacks only.

And still MORE stairs. By now I felt like the little engine that could….I think I can, I think I can!

People have a really hard time following instructions on signs. Wonder how many have fallen off?

The view from up here was pretty spectacular!

There was an old bunker up here that you could go in.

Another bunker and yet another staircase.

The view from us here was absolutely worth the hike up. According to my Fitbit it was the equivalent of 59 floors. Not the most I have ever done, but not too shabby either. When we were in Vietnam we did over 100 floors ones day.

Now it was time to start heading back down. What goes up must come down. That includes us today.

We did it! We made it back down and it was only 1:45 pm. Doubt that was any record time, but we had hiked all the way up there.

I bought myself a “I hiked Black Diamond” t-shirt and a certificate. LOL We also indulged in a pineapple-coconut shaved ice for me and a banana smoothie for Doug. The pineapples sure did look tempting though.

Now to walk back to the bus stop. Oh my, that seems so far away now. But first, quick! Let’s get a selfie in the road in front of the tunnel. Good thing that wasn’t a lot of traffic coming in at this time and we were facing the traffic leaving, so knew if we had to move.

Made it back to the bus stop and had to wait 45 minutes for our bus to show up. Many other routes showed, but not ours. Finally made it back to the hotel and we needed to rest up a bit before heading out again. We were going to head to the Cheesecake Factory for dinner tonight and it was a good walk away. This is a picture of where we hiked up to today. I took the picture from outside our hotel room.

We headed out again around 5:30 pm after resting for an hour or so. Thought we would walk along the beach for a bit on our way to the restaurant. The weather had been overcast most of the time we had been here, which wasn’t really what I think, when I think of Hawaii. I think of hot and sunny. Oh well, we had had lots of sunshine that past almost 3 months.

We walked along the beach as far as we could and then headed off onto the road. We couldn’t believe what we saw when we got to the road!!!!

It was a SPAM JAM Festival!!!! Yes a festival all about the canned meat, SPAM! They had blocked off a mile of so of the main road for this festival. They even had portable bank machines in vans on the side streets to get cash from. It was honestly like nothing we had ever seen before. The crowds were insane! They had live entertainment set up in a few spots. Every meal imaginable made with SPAM. SPAM souvenirs.

The crowds were INSANE!

We finally made it to the Cheesecake Factory and were given a seat beside the gardens. It was so beautiful and not crowded. Guess most people were at the Spam Jam Festival.

As the sun was going down, they went out and lite the torches. An extra added touch.

Placed our orders and got our drinks. It was so nice to sit down and relax after so much walking today. First round I had a Blood Orange Martini and Doug his usual Shiraz. It was delicious.

Dinner was absolutely delicious, but the servings were just humongous. Doug had Spicy Cashew Chicken and I had Angel Hair Pasta with shrimp. Guess Doug was already missing the Asian vibe. Actually we were both already missing SE Asia and may have been tempted to go back, except that our flights home were all booked and tomorrow.

Second round was a Lemon Drop Martini for me and Doug once again a glass of Shiraz.

We were so full, but there was no way I was coming to the Cheesecake Factory and NOT getting cheesecake. I got the Chris’ Outrageous Cheesecake (Chocolate Chip Coconut Cheesecake with layers of Chocolate Cake, Browned Coconut Pecan Frosting) and Doug ordered the Key Lime Cheesecake (Key Lime Pie in a Cheesecake! Deliciously Tart and Creamy on a Vanilla Crumb Crust). Our bill also reflected that we were no longer in SE Asia. I also had an issue with the waiter and my debit/VISA card. He somehow messed it up and put it through more than once and then had to void it. All I could think was, is this going to be a repeat of Singapore and Indonesia? Thankfully, when we got home and I got my bill, everything was good. And my card still worked.

It was time to walk back, yup, walk back, to the hotel. The Christmas store looked so pretty all lite up at night. We had already bought our Hawaii Christmas ornament a couple days ago.

The crowds for SPAM JAM were even more insane than earlier.

There was a cruise ship leaving port as we walked back.

We got back to our hotel and crashed. The bar looked pretty lively, but that a pass for us. We had done 14,632 steps today. That is along with the 59 floors recorded.

It was cheesecake and bed. Tomorrow was a travel day.

Busy night in the yard. Didn’t get Mom in this footage, but she is around.
While weeding yesterday discovered this ant nest. Video is not speeded up. The ants were moving at a crazy speed.
@lonestartexasgrill Valentine’s dinner #deliciousfood #valentines
What we do on a HoT humid day. Enjoy the pool and a beverage or two #hothumid #summer #quarantine
Skyfall martini. Memories of@our last cruise in February on the Emerald Princess. We had the best best waiters in Crooners. #PrincessCruises #cruising. #polynesia #vacation #travel #martini #EmeraldPrincess
18 beautiful red peppers picked today from my garden
Loading Comments...
%d bloggers like this: