We had to get up early at 0700 to catch our bus (actually 11-passenger van) to Phnom Penh at 0830.  No need for a taxi or should I say a Tuk-Tuk to take us to the bus station as it was just around the corner and down the street from our hotel. We had picked up a couple of extra donuts and a slice of a rolled cake for this morning’s breakfast and had them with some water.  Didn’t really want coffee as the buses didn’t seem to have washrooms on them and you never knew if or when the bus would actually stop for a bathroom break. As we left Battambang I snapped a few pictures.

The trip took 5 hours with only one 20-minute rest stop break.  The bus finally stopped for the break after approximately 3 hours of travel.  I have to say that the rest stop could have used a little sprucing up in the washroom department.

As we got closer to Phnom Penh we noticed more and more police ‘directing’ traffic. Not sure how effective they are standing on the sides like this.

After checking into the Silver River Hotel we were extremely happy to find that this hotel  finally had an elevator.  Of course I took some pictures of the room and ‘admired’ our view.  Room was quite nice, but the ‘view’ left a bit to be desired. This is what you get when you book the cheapest room in a hotel on Expedia.  What more could you want for $46.00 a nights, taxes and fees in? 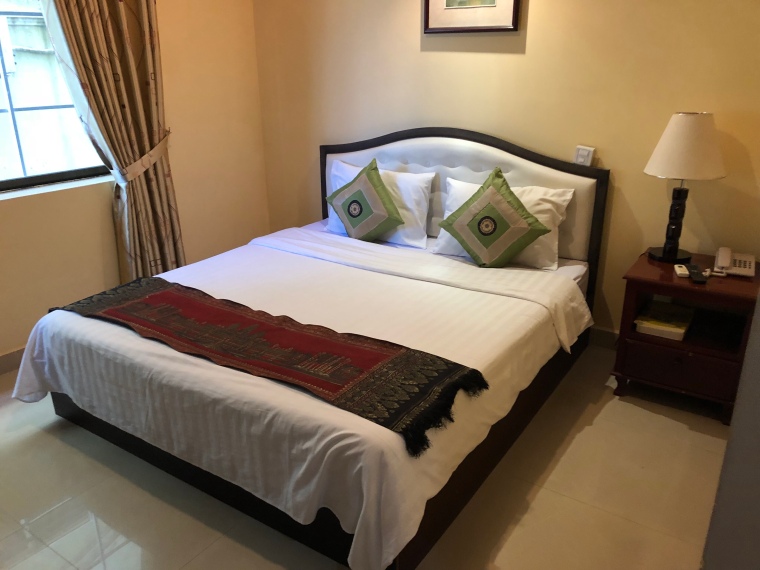 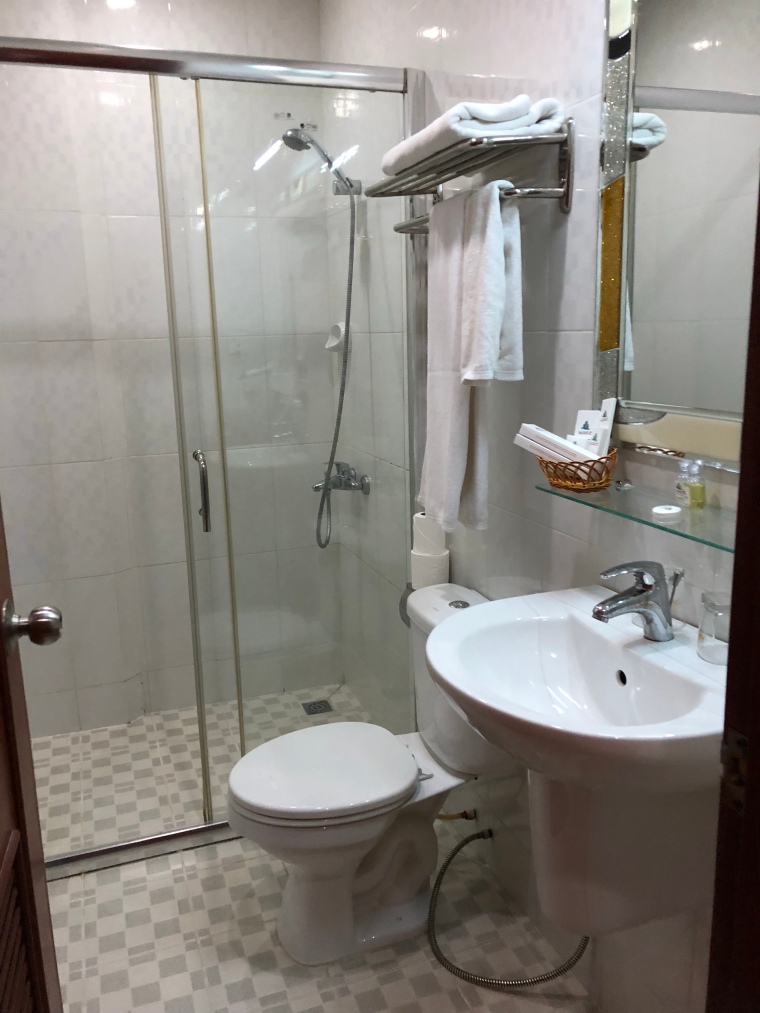 Since we hadn’t eaten since breakfast we headed out in search of food and to see the surrounding area.  Came across a restaurant, Angkor Mithona on the corner of our street and there were people in here eating and enjoying a beverage. Our indicator that the restaurant might be okay. It was Happy Hour.  Turns out there is lots of happy hours in Phnom Penh.  So we headed in and selected a table beside the road. After all we need to enjoy our view.  Ordered a couple of COLD draft beers and a pepperoni pizza.  Both were pretty good and once again I can’t believe I don’t have any pictures.  I’m starting to think my iCloud is loosing some of my picture.

After our bellies were full we continued to tour around and headed over to what seemed to be the main street down by the river.  Came across a travel agent and booked our next “bus” for 20 March to Sihanoukville, Cambodia in the country’s south-west on the Gulf of Thailand.

On the way to the travel agent we had passed by a couple of bakeries, so on our way back the temptation got the better of us and I guess we weren’t as full as we had thought we were. We decided to stop at a pastry shop and enjoyed desserts and yes you guessed it, iced vanilla lattes. Desserts were okay but definitely not good enough to go back again.

We headed across the street to walk around the riverfront park. There were many of these beautiful trees along the path. 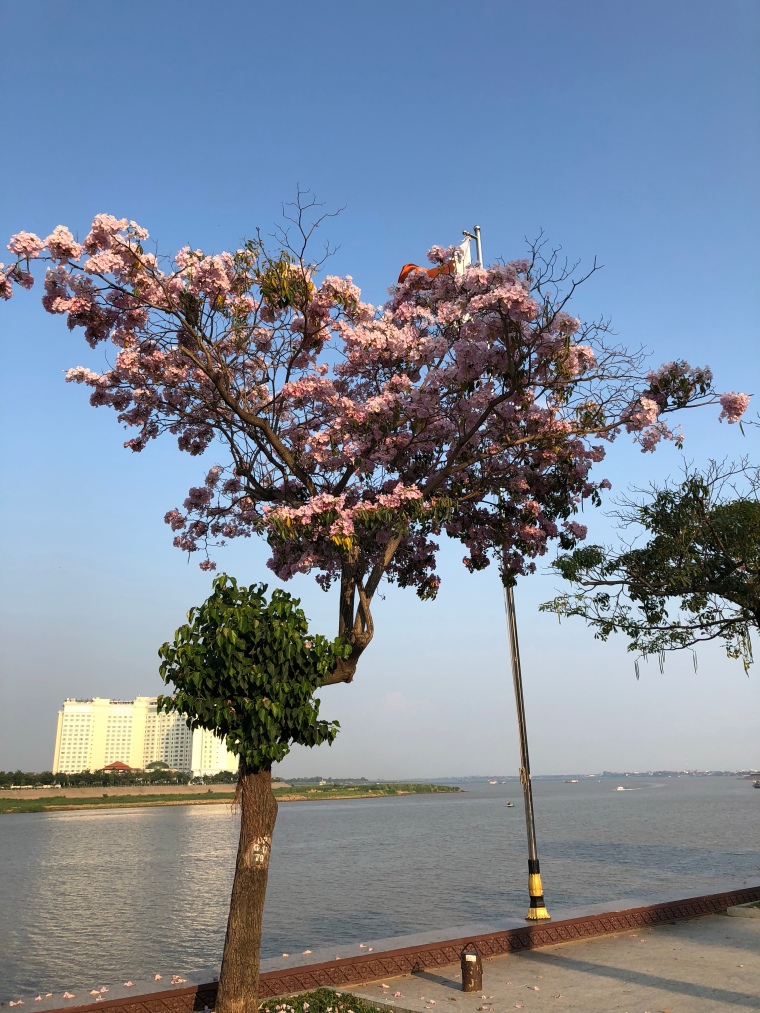 There were so many people begging for money. Some seemed to be in real rough shape and many others were missing limbs. We gave money to a couple of legless street people but had to stop as there were just so many of them. We actually crossed the street and out of this area as it was a very uncomfortable feeling there were that many. Further along the street we crossed back over to take a few pictures of the flags that lined the pathway.

We are not sure if there was some special event going on or whether it was just an ordinary Saturday night down by the river and the Royal Palace but there were hundreds of people and venders setting up. Saw this little guy on the right playing in the water naked as could be.

Also many people lined up for this building.  I’m guessing it was for some religious event they participate in as they all seemed to be coming out with bouquets of the same flowers and stopping to do something .

Since the sun would be setting soon we or should I say I decided to wait around to photo the Royal Palace at sunset.

Stopped at a Circle K mini-mart, similar to a 7 Eleven (which are now popping up back  home in Ottawa) to buy water and Gatorade.  We love Circle K as they usually have the snacks we enjoy…..Pringles, Oreos and Ritz crackers…..LOL  This is often where I get my random snack of the day to photograph. 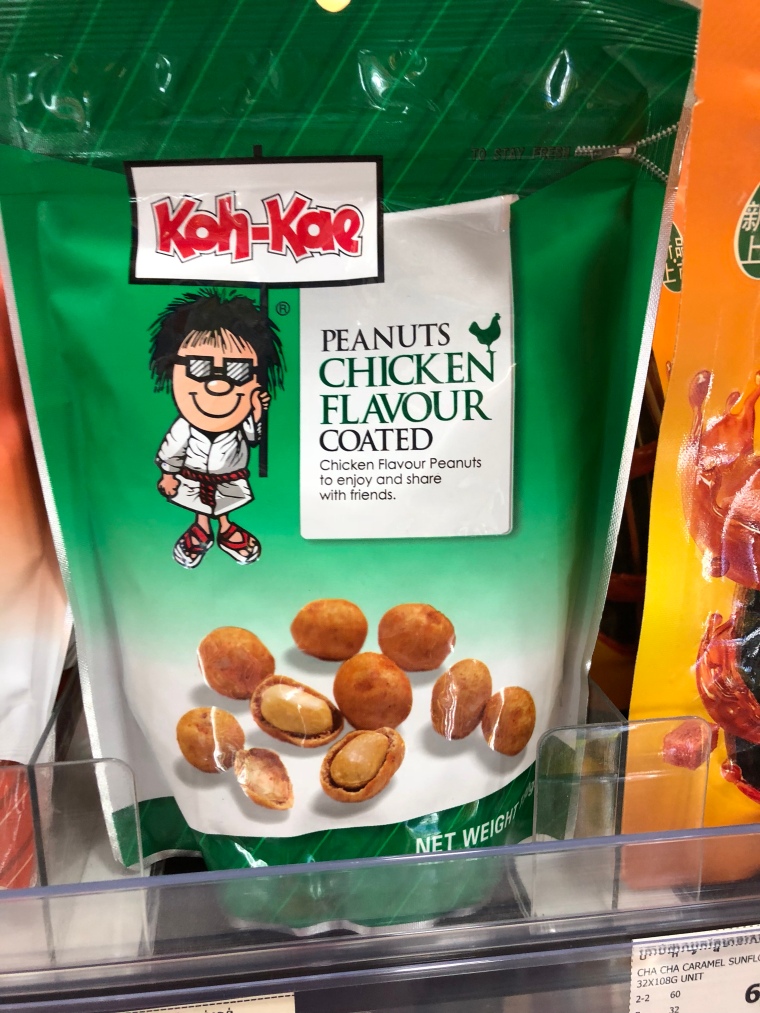 We were ready to head back to the hotel as we had hand laundry to do (when don’t we?) and wanted to work on the blog if the wifi and internet were strong enough.

While relaxing we managed to eat a whole can of Pringles and drank the Gatorade and liters of water to replace electrolytes (especially sodium and potassium) that our bodies lost in this wretched heat.  Today had been one of the hottest days we have encountered so far and as we all know everyday has been HOT!