We had booked an excursion for today with Lomlahkkhirin High Speed Ferries for a one day snorkeling trip to Koh Tao and Koh Nangyuan. Originally we were going to go to Koh Tao for a night but eliminated that from out schedule. Just too much moving so we decided to do a day trip instead.

We were picked up at our hotel around 8:10, it was an early morning for us. Even the hotel restaurant wasn’t open for breakfast yet, but we were able to get a bun with cheese and a couple slices of toast from them. We had just finished that when our ride showed up. Yup another open truck taxi. We squeezed in and it was a tight fit. Doug and I were both at the back, one on either side hanging on. No pictures of this drive because I was not about to let go. Again another very curvy hilly road. I don’t usually get nauseous in a vehicle, but I came close on this drive. Maybe because I had just eaten. Made one more stop to pick up another two girls, but they got to share the passenger seat in the front. Two in one seat. They like to pack them full here. The driver dropped us all off at the tour company’s office where we all signed our lives away. A couple other buses showed up and then it was time to go to the boat. Wasn’t sure where the boat was, as we didn’t seem to be near the water. The lady had us follow her down a street, through a park and to a rocky waterfront. No pier. I had mentioned to Doug that it was weird that there were no Chinese on this tour as they are traveling here by the thousands. When the boat showed up, I had my answer. It was already full with the Chinese invasion. Not a seat to be had. Where were they going to put the 14 or more of us? After a minute or two the Chinese started to shuffle around and made available a few seats.

We had 6 Israeli men in our group and they were given the area in the front of the boat to sit. Out in the full sun but the best views. We got a seat right behind the Captain (driver) of the boat. A family of 3 with a young child were given seats at the very back of the boat again in the full sun. The others were given seats here and there. All seated and we were off! This was definitely a high speed boat as we seemed to fly across the water to our first stop, snorkeling at Koh Tao. Even at the high speeds it was a good hour or more to here.

Snorkeling equipment distributed. Doug decided not to snorkel after seeing their equipment and hygiene. I opted to do it anyways. At least I got a new mouthpiece on my snorkel. We had an hour stop. I usually jump in the water off the front side of the boat, but I couldn’t stand to do it as there wasn’t really any place to put my feet. The very front of the boat still had too many people there.

Had some great snorkelling as there lots of fish, especially around the rocks and coral. The waves were quite strong and really had to be careful as to not be thrown into the rocks. Saw a couple of people back on the boat that had obviously run into the coral. It’s very sharp and cuts you easily.

As it was a cloudy day, I tried to stay in the sunny areas as you can see better and get better pictures. Again I mainly videoed, but here are a couple of pictures. You can definitely tell which one was taken in a sunny area.

I snorkeled for about 30 minutes and climbed back onboard. Apparently we had another 30 minutes there. Guess I missed a little excitement when I was snorkeling as Doug was saying that they had to help one of the Israeli men out of the water and back onto the boat as he was vomiting. Guess they had been out partying the night before and this guy must have overdone it. He spent the next hour up at the front of the boat vomiting. His friends had to keep coming to get him new vomit bags. Good thing I wasn’t sitting up there. I have a very weak stomach.

Once everyone was back onboard we headed over to the next stop, Koh Phangan. I have seen Paden’s pictures and internet pictures of this place and just thought it was breathtaking. Let’s just say some things are better in pictures. I was a little disillusioned when seeing it in person. First up was the lunch that was included. Not much to say about that……not much for me to eat either. I had mainly rice and fruit. The plain cake slices had a slight hint of banana and were good. Not sure what the brown thing on top was, even after I took a bite. I did not finish it and also noticed a lot of other people didn’t.

After eating my lunch I stood up to head to the washroom when disaster struck…….my orthotic flip flop blew apart. Yup, it came unglued from between the upper and lower soles. Both of us thought I took pictures of the blow out, but I guess it was such a devastating event that I didn’t. Okay, there must be a shop on this tourist island! We went in search, me hobbling along with a broken flip flop, until we found the ‘check in’ desk of the ‘hotel’. There was a little shop, but it was locked and no one around except our sick Israeli guy from the boat. 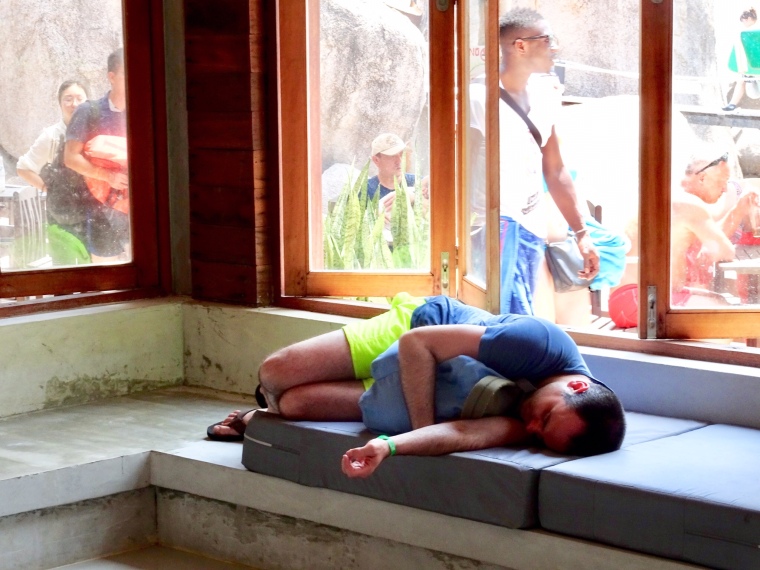 Finally, they found her. Thank goodness they had some flip flops. Not really my size but they would have to do since we still had lots of exploring left. There is a great lookout point at the top of the mountain and we wanted to go up there. There was no way I could do it in bare feet. The boards just getting to the steps would be too hot.

Came across this bar on our way. According to the sign it should have been open but looked a little under stocked.

So we got to where the steps were to go up to the lookout. Not sure whether I just didn’t take any pictures or something happened to them, but I have none. The Israeli men were just coming down and we asked them if there were many steps and how steep. There were a lot of steps and very steep. No consistency to them and no handrails. I tried the first 10 or so and was just too scared on them. There was no way I would make it up a couple hundred steps. We turned back. I was disappointed, but knew I would never be able to do it. The lookout point is at the top of this mountain. Once at the top of the steps you needed to climb the rocks to get the good views. Too old for that. If you really look hard you can see people on the rocks at the very top. 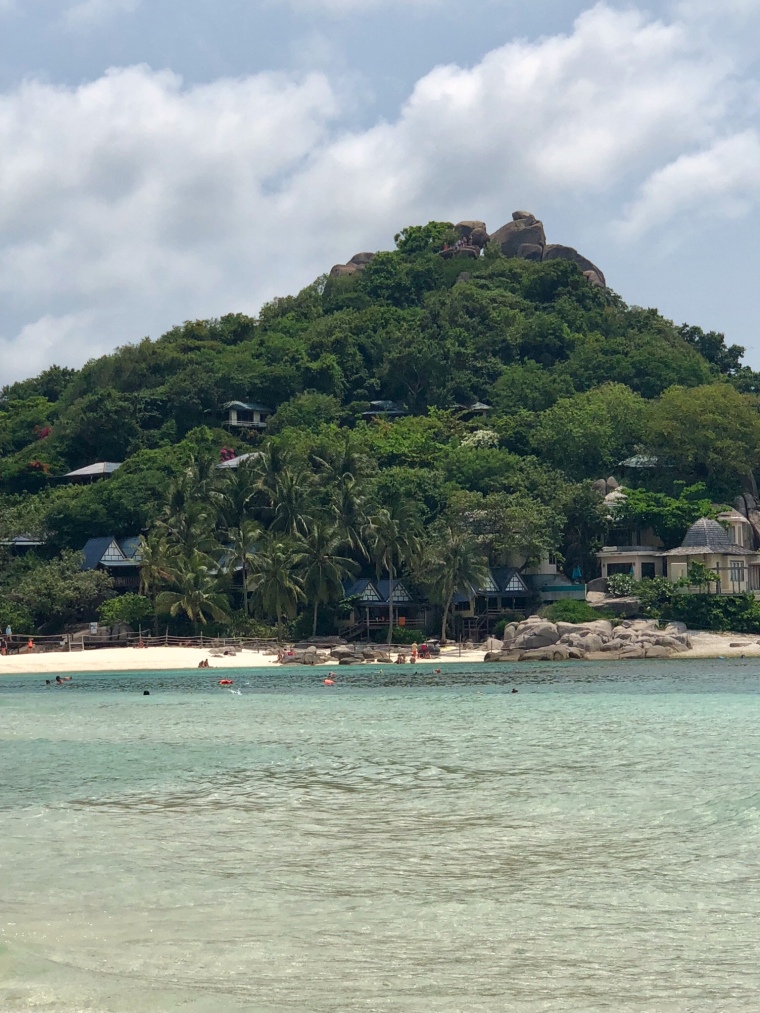 This is an example of the steps up to the cabins. I would not have even been able to do too many of them. Some were much steeper.

An amusing sign to us. The drop off was between 15 – 20 feet down onto rocks.

Since we didn’t climb to the look out point we headed back to the beach and decided to walk across the peninsula. Since the tide was in, lots of it was covered by water. Don’t let the white sand deceive you. It was made up of sharp broken shells and coral. It was so hurtful on the feet. Really wished I had my water shoes. 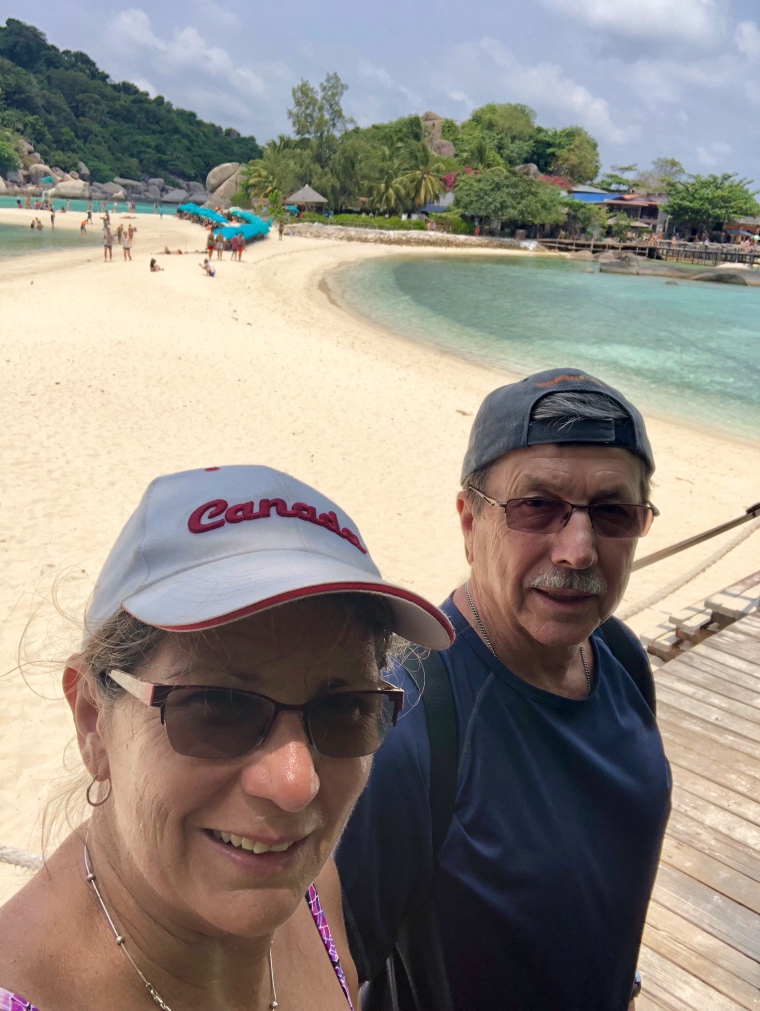 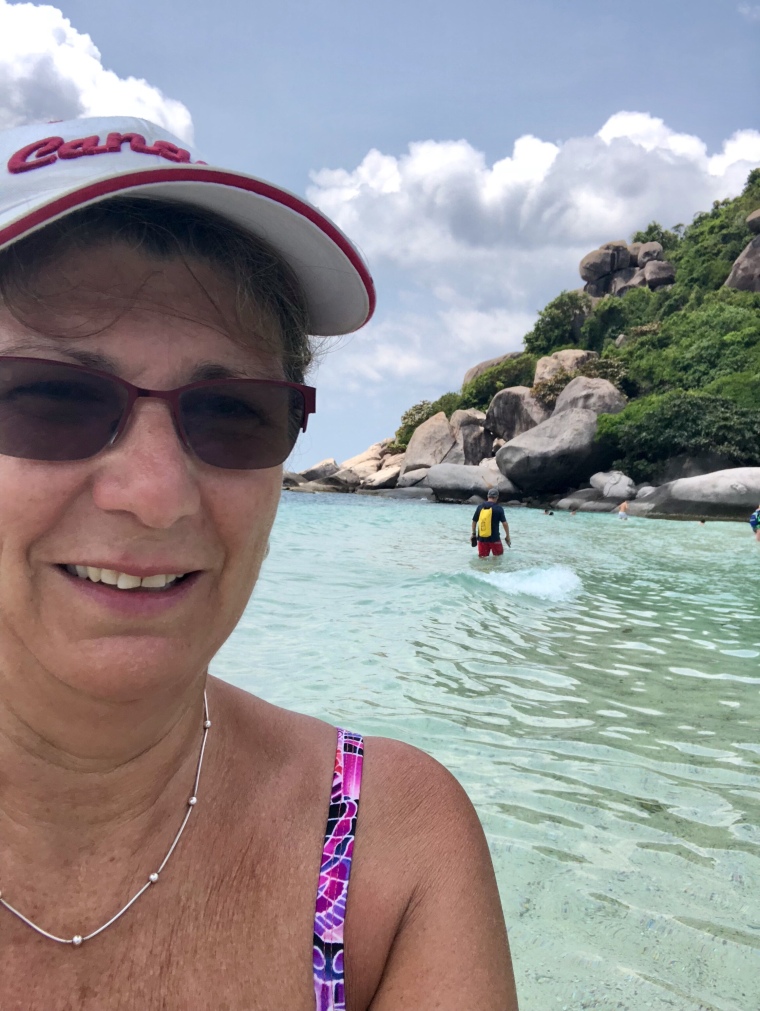 We still had over hour to wait until it was time to leave so we grabbed an adult beverage at the bar and relaxed for a bit. There were no loungers left so this was the next best thing. We needed some shade too.

After being dropped back off at the hotel we relaxed for a bit by the pool before heading out for dinner.

We headed back down to the beach area where there were lots of restaurants. We ended up at Mama’s Schnitzel Chicken. I had the Chicken Schnitzel & Chips & Israel Salad. Doug had Cheeseburger w/chips. Doug’s was good. Mine was AMAZING! Two large schnitzels and I ate them both! 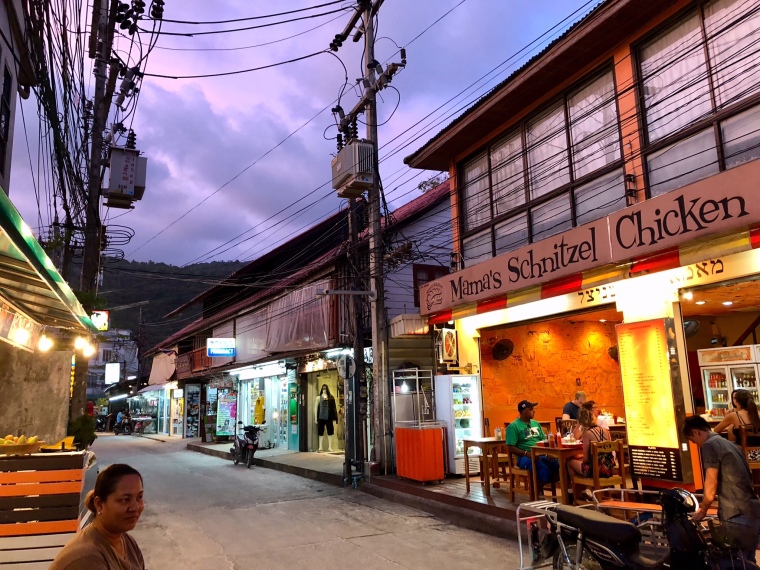 On our way back to our hotel we saw this beauty. We know where her twin is!