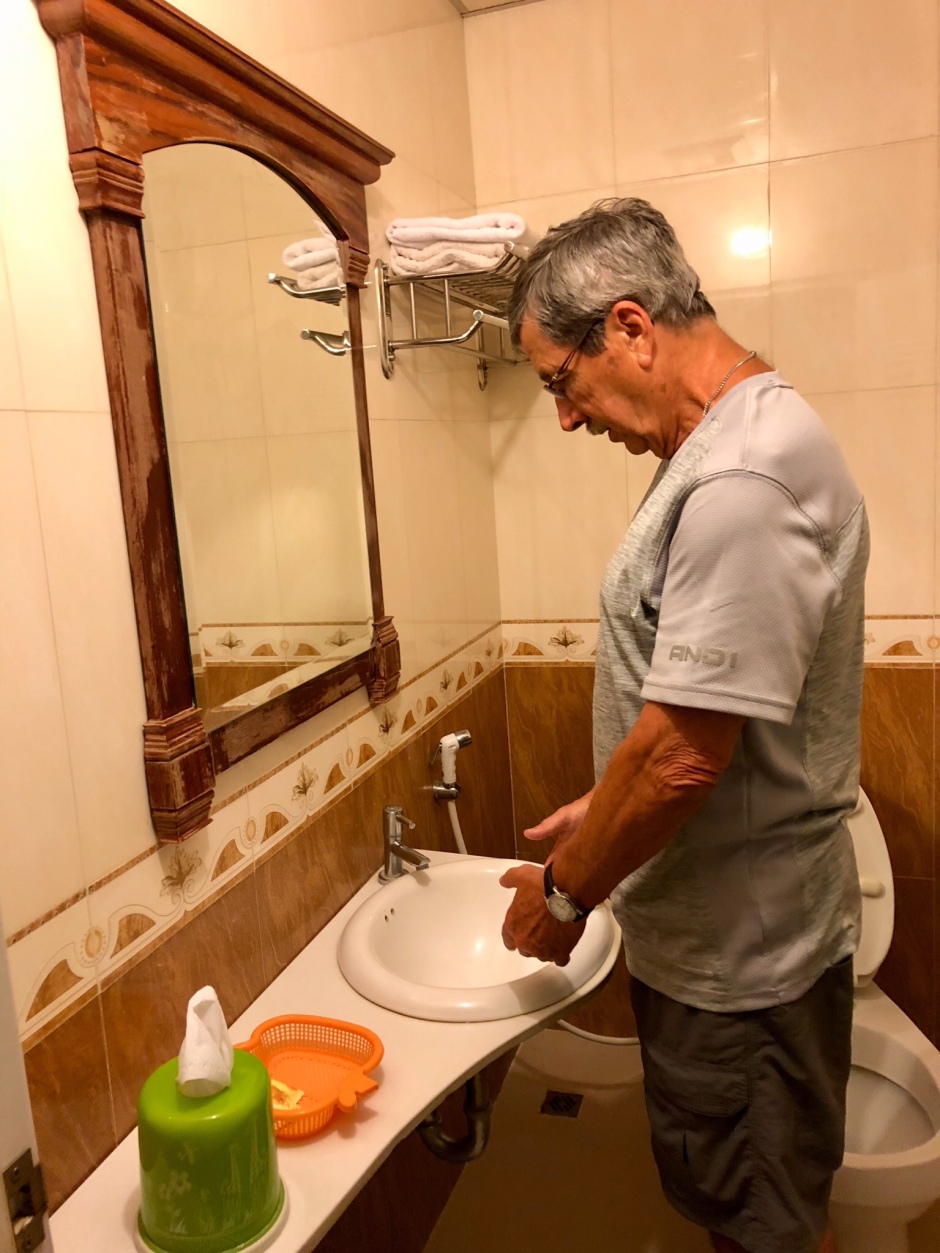 Today was another travel day. Even though Battambang is spelled ‘Battambang’ it is actually pronounced ‘Battambong’.

After a nice breakfast beside the pool we packed up our stuff and relaxed by the pool for an hour or so.

We had booked a bus to Battambang for 2:00 pm through the hotel. The cost was $7.00 US each. Can’t go wrong with that price. The bus company, Mekong, were to pick us up between 1:00 and 2:00. Cutting it a bit close for a 2:00 departure. The pick up van showed up about 1:45. Had one more pickup after us and then to the bus depot. We were on our way. A mid- size passenger van with 12 people. The trip was only 77 km but would take between 3 and 4 hours depending on traffic and road conditions. There was a lot of construction along the way, mainly off to the side, as it appears they are putting in a new drainage system and expanding the road to 4 lanes.

Areas of Cambodia are spotless. No garbage anywhere and in other places there is so much garbage thrown around. It’s not as bad as Vietnam was but will be if they don’t get a grip on it. It appears that they burn a lot of their garbage as you will see piles on fire here and there. Our tour guide was saying that they don’t have a recycling plan in place so the plastics just pile up. You can see that as you drive around the country. Sad as it’s a beautiful country.

This is the dry season and so many of the cows and horses are skin and bones. Once the rainy season comes the grass grows lush and the livestock fatten up. There is grass around just not lots. Even though it is dry season the trees are full of beautiful flowers as are the plants.

Many of the fields have been plowed just waiting for the rain to come. I think they said it should start in July. They don’t get monsoon type rain, just some rain most days during the rainy season. Saw a few groups of men ‘playing’ in the ponds. Water looked so dirty – you can’t drink the water here. 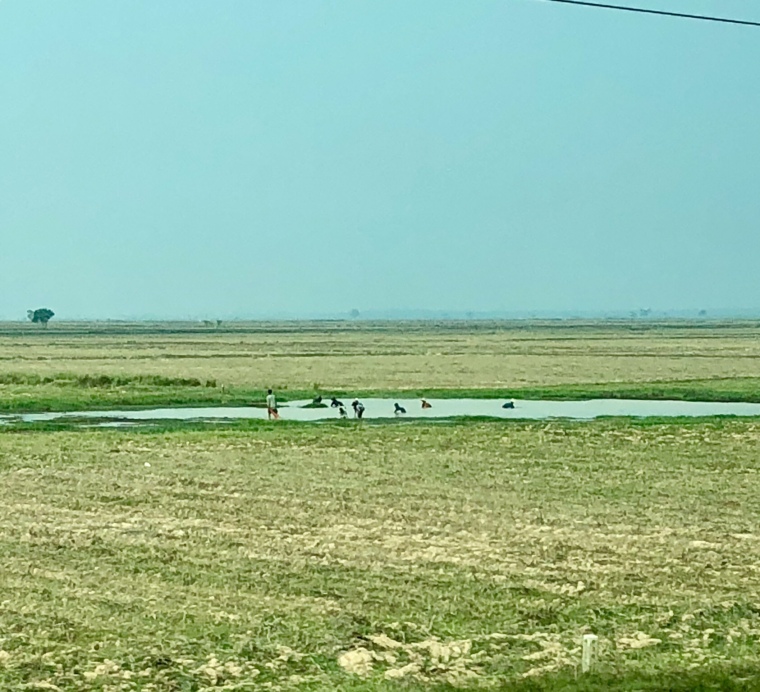 As we drove along we got to see many homes. A few looked very luxurious but some were just a floor and roof with hammocks hanging on them. Many are built on stilts and they seem to hang out under their homes. The sun is brutal here.

You can see in places that it appears the family now had more money, as they are building new homes beside the old ones. Just can’t imagine what their lives are like. We just have so much compared to these people. I left my flip flops behind that I had bought when we were on our excursion on Koh Phangan. We left them on purpose. Hope whoever was cleaning our room can use them. Washed them all up (they had only been worn once) and left them on the pillow with the money tip.

Passed a large groups of Monks marching for some cause. Didn’t get the reason, but they had the road tied up for a few minutes.

Just saw 5 people on a scooter. 3 adults and 3 kids. We can barely fit that in a car.

Took us a little over 3 hours to get to Battambang. The hotel was only 1/2 km away but we decided to take a Tuk-Tuk as it was only $1 US and there didn’t really appear to be any sidewalks. Tuk-Tuk driver gave us a map with his contact info on it. We will probably call him tomorrow to use for the day.

We got to our hotel, Asia hotel. We were booked on the 3rd floor. It took us a couple of trips to get all our packs up our room. There must have been a thousand steps for each floor. Thanks Paden for recommending this hotel. We got spoiled in our last 2 hotels because they had elevators. There was actually 67 steps…..every time we went up or down.

The sink was the smallest, lowest one I think we have ever seen. So tiny. The room was fine after all we were only paying $20 US a night. 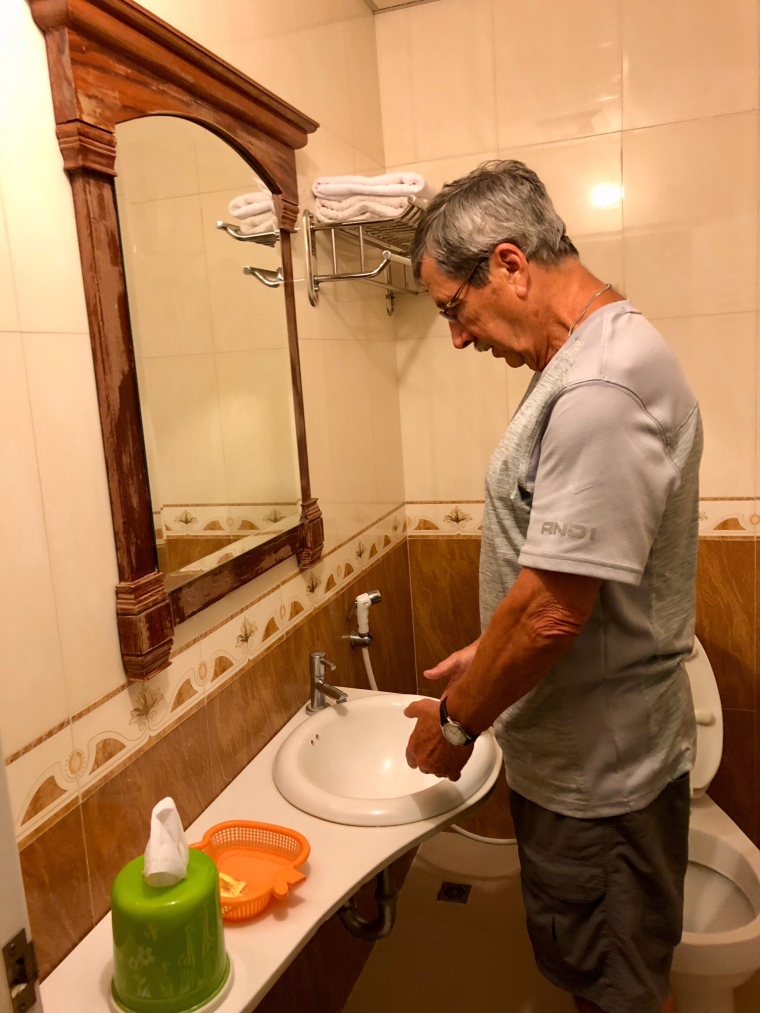 After resting up a bit we headed out go find some dinner. Our hotel was in the middle of what appeared to be mechanicsville. No place around where we could eat. We got the directions to ‘downtown’ and walked. Didn’t feel the safest, but we made it there. There are also plenty of security guards watching either shops or the streets. We couldn’t determine which.

Found a place, White Rose Restaurant, where it appeared most of the tourists were eating and joined in. 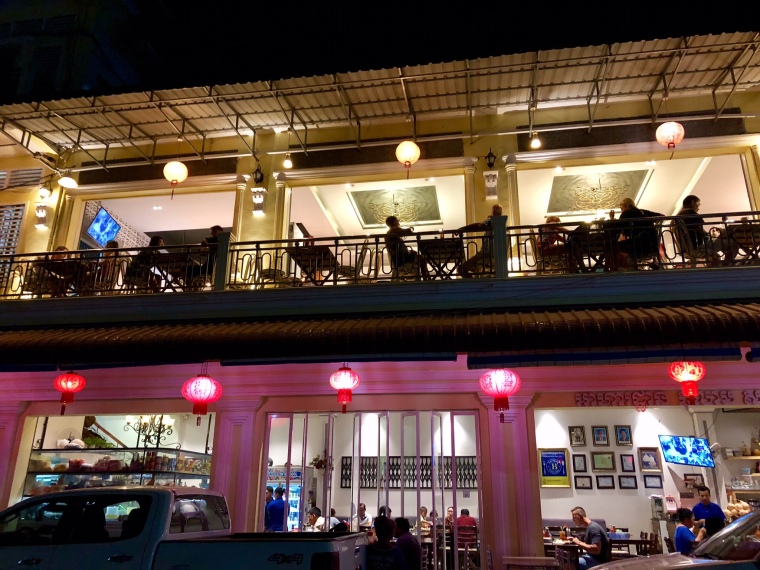 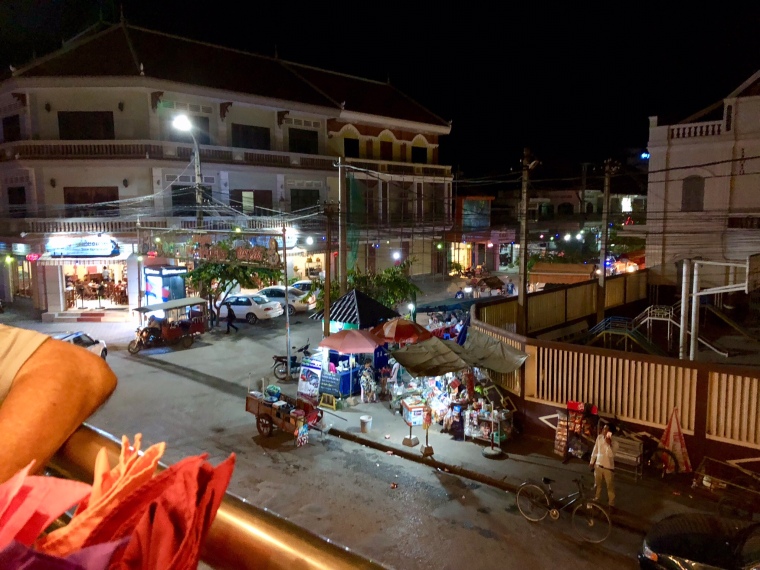 The food was pretty good. I had the Fried Ginger Chicken and Doug had Fried Pineapple Cashew Nut with Chicken.

We walked back to the hotel, me wishing we had taken a Tuk-Tuk every step. It was so dark and desserted. 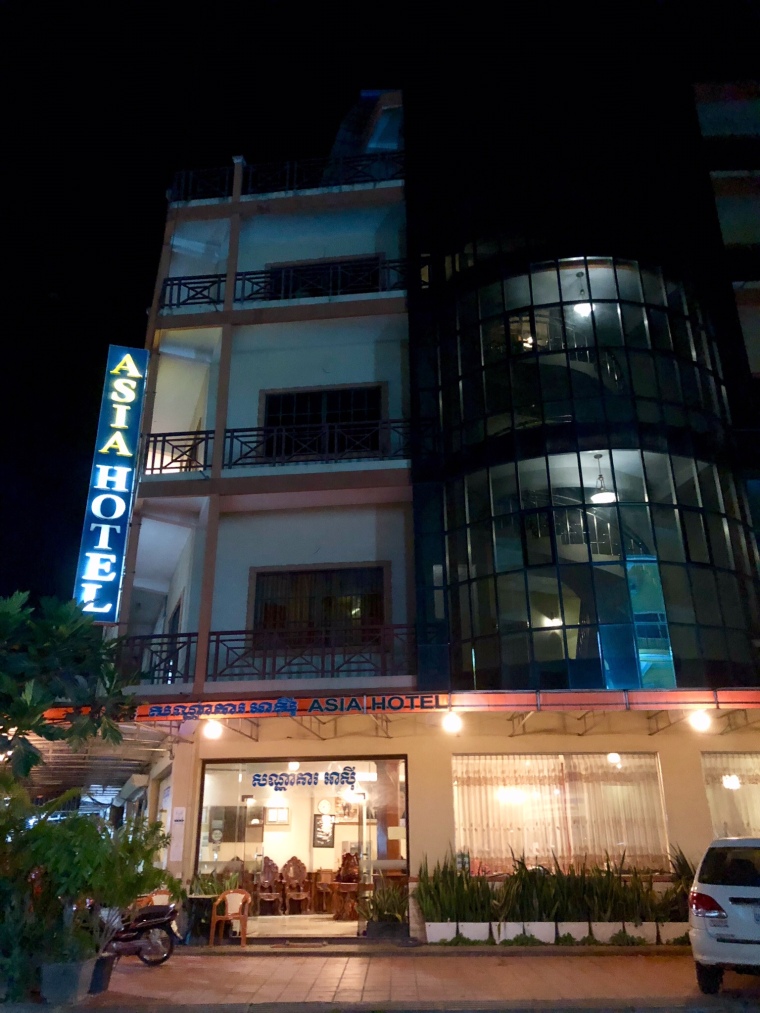