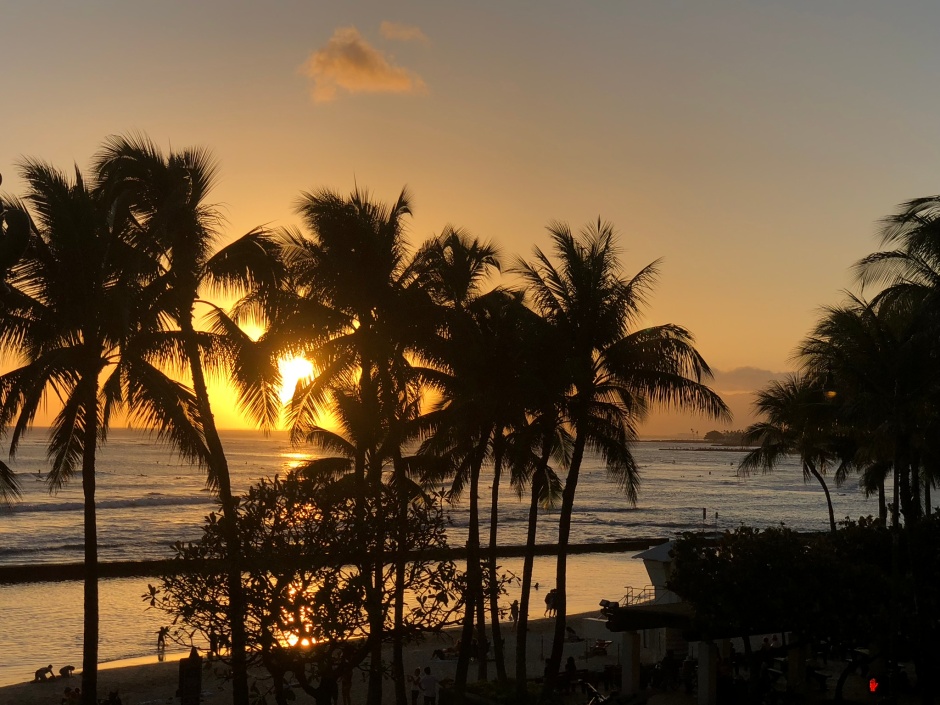 Today was going to be a long day. We were going back in time, literally, going back in time. We were leaving Australia and flying to Hawaii. If all goes as planned we will technically land in Honolulu, Hawaii earlier on 25 April than we leave Sydney, Australia on due to crossing the International Date Line.

Our flight to Honolulu isn’t until this evening, so we have most of the day to spend in Sydney. Today in what is known as ANZAC Day in Australia, a day for commemoration and for thanking the veterans. Remembrance Day is soley about remembrance. A statutory holiday here, so a lot of places and work places were closed today.

We headed over to a restaurant that was across the street to grab breakfast. This place was so busy with everything that was going on today. I ordered waffles and Doug had French toast. Even though you don’t tip here in Australia, because they have to pay the staff more to work on statutory holidays, that extra cost is passed on to the customer and there was a 15% service charge added on to all food and beverages today. From what I can see, the minimum wage for a permanent worker over the age of 21 is $18.29 an hour. Apparently casual workers get paid more. And from what I can tell, they seem to get double time on statutory holidays.

As we ate, we watched as motor scooters were towed away. There had been signs up the whole time we have been here in Sydney about NO PARKING on many of the streets for today. They obviously enforce it here. It was priceless to watch them load the scooters onto the tow trucks.

After breakfast, we headed back to the hotel to finish packing and checked out. The hotel would store our bags until it was time for us to leave for the airport. We would be taking the train to the airport since our street was closed and we had no idea how long it would take a taxi to get to us. They could not guarantee anything with the crazy traffic today.

We still had lots of time, so we decided to walk around and see some more of Sydney.

Here is another one of the faux pas we have seen on our travels. The sign clearly states “Sorry we’re Closed” with the door wide open welcoming patrons.

After stopping back at he hotel to pick up our bags, we made our way over to the train station. We knew exactly where we needed to go as we had checked it out earlier. The station was also only 2 1/2 blocks from the hotel. We purchased our tickets, found the stop and boarded the train. It was so easy.

We arrived at the airport with lots of time to spare, so decided to grab a snack. A couple glasses of wine and a couple orders of french fries. What more could a person want?

We were flying Qantas. First time for us with them. Boarding was supposed to start at 1830 hrs, for a 1915 hrs departure, but didn’t get boarded until 1920 hours. It wasn’t full so that was great, especially since it is approximately a 10 hour 38 minute flight.

Didn’t take them long before they came around offering up drinks and dinner. Both were good.

Since the plane wasn’t full we were able to stretch out. Doug stretched out across our 3 seats and I moved one row back where there was a vacant 2 seat row. Neither of us slept much, but I never do. Doug can usually sleep on flights though. We made up some time for our late departure and landed in Honolulu at 0450 hr, 26 April 2018, Sydney, AU time, but 0750 hrs, 25 April 2018 Honolulu time. There is a 21 hours time difference.

We grabbed a shuttle from the airport to take us to our hotel. We had booked the Aston, Waikiki Beach. Price was reasonable for last minute in Waikiki and it was across the street from the beach. We checked into the hotel around 1045 hrs but our room wasn’t ready. We had figured as much, since we were so early.

We just walked around and ended up sitting in an area around the pool waiting for our room to be ready. What? They have bar service here?

The wait was worth it and they upgraded us to a ocean view. Room 1502. Wasn’t straight on ocean view, but we could still see the ocean from our balcony. From the other side of our room, outside was the view of Diamond Head.

We were really tired, so once we got into our room we decided it was nap time. I couldn’t sleep, but Doug certainly did.

Once Doug woke up from his nap and I had rested up, even though I didn’t sleep, we headed out to walk around and see what was around us. We didn’t go too far, as we were still tired and jet lagged, but I felt like I was in a Hawaii Five-O episode.

We decided to head back towards the hotel and eat at the Tiki’s Grill & Bar, the restaurant that is attached to the hotel. It has a great view and we were given a great table to view the sunset from. Plus they had live entertainment.

Doug had the Six-Layer Chocolate Cake (a bombucha 3/4 pound slice of chocolate cake, raspberry coulis, fresh whipped cream) and I had the Haupia Crepe Cake (twenty layers of crepes, fresh berries, and house-made whipped coconut crème). You could definitely tell we were in the USA now. Even from our bill.

But the sunset certainly made it worth it.

Busy night in the yard. Didn’t get Mom in this footage, but she is around.
While weeding yesterday discovered this ant nest. Video is not speeded up. The ants were moving at a crazy speed.
@lonestartexasgrill Valentine’s dinner #deliciousfood #valentines
What we do on a HoT humid day. Enjoy the pool and a beverage or two #hothumid #summer #quarantine
Skyfall martini. Memories of@our last cruise in February on the Emerald Princess. We had the best best waiters in Crooners. #PrincessCruises #cruising. #polynesia #vacation #travel #martini #EmeraldPrincess
18 beautiful red peppers picked today from my garden
Loading Comments...
%d bloggers like this: